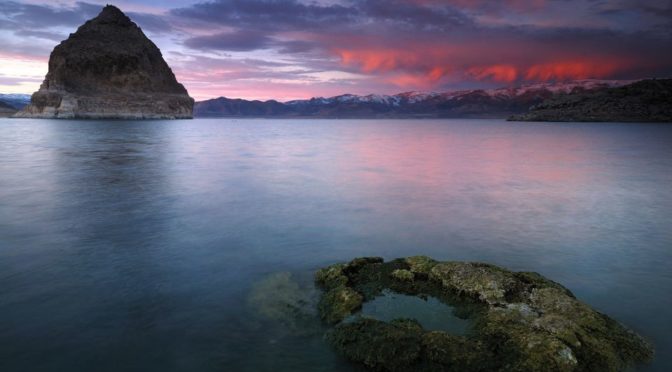 There is a stunningly beautiful place here in Nevada called Pyramid Lake. It is on the Washoe Paiute reservation and is a naturally Brine lake and the only home to the cuhcui fish as well as the Washoe Pauite tribe. This is a large lake and is open to recreational use for a moderate fee, with one exception – The Pyramid Island itself. You must be a member of the Washoe Paiute Tribe to visit this space as it is believed to be the source of the lake and is the most sacred of  places for the People. There are rock formations there that are believed to be the Mother of The Paiute tribe and her handmaiden,

Evenings on the beach can be spent doing numerous things that are typical of evenings camping, open fire, making s’mores, listening to music, sharing space with friends, playing corn hole, or if you’re of a mind, watch the Spirits dancing by the water, listening to the cries of the coyotes, owls, and other nocturnal creatures of the desert, even swim in the brine waters of the Mother’s tears.  From personal experience – sitting in the shallows in the moonlight and listening to the world breathe as the moon’s light reflects off the waves and currents is an unbelievably mind expanding, experience.

As Witches we are sensitive to sacred spaces no matter the source of Spiritual belief that created them, we sense them, feel them, acknowledge the Divine Wisdom within  them and we honor them.  When we are approached by spirits in pain or in need we usually respond in a way that returns balance.

With all of this in mind, imagine my surprise that a fellow Witch would brightly and happily say that she’d made arrangements with another to go visit the Pyramid Island. When I brought up that it was forbidden for people who are not Washoe Paiute to visit, they shrugged and stated it was enough that they wanted to see it.  When I tried to explain how offensive it would be to the People for them to violate their Sacred Space in such a way as intruding uninvited, they once again stated their intent to visit and in the interest of peace I spoke no more and remained silent. My silences can be *very* loud and say more than any number of words from my lips.

As I’ve reflected on the conversation, my outrage, and their seeming entitled attitude about a Sacred Space that is not theirs, they’ve not been invited to, and intend to intrude upon even knowing they aren’t welcome reminds me that in our rush to be seen and accepted as Witches, some of us have indeed forgotten or ignored what it truly means to be a Sacred Being, to walk in balance between light and dark, and to honor the Divine that we find in our travels.

Magickal people, with our additional senses should be held to a higher ethical standard when it comes to that honoring of Sacred and Divine spaces in order to more protect and heal our Mother Earth. If we as Witches become just as guilty as those who have no care for her by desecrating, disrespecting, and dishonoring these spaces of Betwixt & Between by any means,  then we are as guilty of the destruction and desecration of our Mother as any who deliberately pollute her lands, rivers, and oceans.  By doing so a Witch breaks their oath to the Mother, the Goddess, and all creatures will mourn the loss of that source of light.