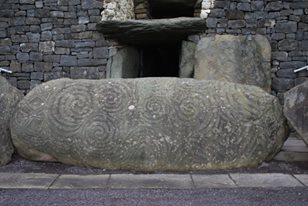 Hard to believe the Wheel has fully turned since my last posting. I keep telling myself to sit down and write and keep getting distracted.

So, I was fortunate enough to travel to Dublin, Ireland a few months ago. The processing of events is still ongoing but has reached a point that I can now make sense of what happened, how my previous life intersected with my current life, and how I can apply the new knowledge gleaned from the ancestor there to my current physical experience.

January 23rd this year was a full moon, and in my exuberance to experience as much as I could while I was there I booked a tour to see NewGrange and Tara and the Village Slaine. I met the coach at AIB, and quickly paid and got my seat early that Saturday morning. I settled in for the drive and eagerly listened to the Mary as she shared her knowledge of the surrounding areas of our drive, battle sites, birth sites, historical data that can only be shared in the fine Irish tradition of Story Telling. I was in heaven on earth the depth of her knowledge and how she shared it was truly enchanting.

We arrived at the Newgrange museum site where I was surprised to learn that this passage mound predated even the great pyramids of the Giza plateau, by nearly a millennium, and continued the tour through the displays they’d created after the excavation of the mound on the times, tools, shelters, and lifestyle of the indigenous people of the time. Their lifestyle quite resembling the Native Americans of the southwest at the time the Europeans discovered them a few hundred years ago.

The Neolithic art of the site is amazing, the way it has survived nearly 7 thousand years makes it all the more mysterious and magical. There are literally thousands of theories on what the different pictographs and symbols may mean, but no one truly knows for sure – that being the case – I went to my default and felt with Spirit instead of Intellect.

We left the museum on small shuttles and were driven up to the actual Newgrange mound, which I found thoroughly energized with ancestral energies, and a familiarity (though I’d never been there before in this physical experience) that was almost cozy and warming.

Our group was then separated into 2 groups, I went with the first group into the mound, the passageway is very narrow, and the entrance so low that even at my 5’3″ I had to duck to avoid a concussion from neolithic stone. An echoing voice in my head chimed in at that point “I didn’t have to do this before!”  I’ve had random voices chime in before so I wasn’t off balance yet, and continued up the passageway until I reached a small room with 3 alcoves each felt of a different energy, each contained a large stone bowl, and each in a different direction. The passageway itself is East, the 3 alcoves are South, West, and North.

The alcoves are covered in carved grafiti from 4 hundred years of unguarded tours, scribbled names and dates all the way back to the late 1600’s, which just goes to prove mankind has always been afflicted with the jerk gene. But, beneath that horrid graffiti looking through it, past it, beneath it is some of the most amazing, beautiful and pure neolithic art you will ever find. Enough so that they set the tone for the alcoves.

I studied the South and the energy coming from there was masculine, warrior, the guardian of the people, the strength of conviction and provision a masculine energy of fixing, treating, and commitment.

I then turned to the West alcove, where the art was still as stunning, and found an energy of life there. Life being lived, loves being together, pride in children, the gathering of crops, the grinding of wheat to bread, birth, rebirth, just that lovely passion filled energy that we call living.

I then turned to the South, and again the voice chimed in “My bones are gone!” I silently answered that it was the year 2016 of course they’re dust by now! And went on to study the alcove itself, the art was swirls and spirals, stars and the sky, including recognizable astrological signs, and the energy was mystical, magical, definitely the energy of Other, be it Witch or Fae, a mixture of the two perhaps, when people and the Sidhe lived and communed together perhaps? But Magical is the only sense of energy you can pull from that alcove – it vibrated with it, to the point of thrumming, and I was enthralled, at this point hearing the tour guide as if from a great distance as the ancestral energy began to rise and drown out nearly every other sense.

It was then our turn to leave the mound and I did so already half entranced. With the full moon that day the House of Brigh had decided to gather at our different places and points in time and create a healing chamber for our Founder, Teacher, and Mentor. And there’s a convenient circle just outside of the mound off to the southeast just a tad.

It’s there that I walked until I heard the voice chime in again “This is my spot” I slipped out of my shoes and put my bare feet to the green grass of the land and began the exercise to call the ancestors and the Sidhe to help with my work.

What happened next was life altering and I admit I will not share all of the details, as there were personal messages shared, ancestral knowledge passed on that I’m still digesting, and those neural changes that working with the Fae always brings that take time yet give so much in return.

Although it’s there that Thorin, my friend and guardian through many magical adventures, misadventures, and mundane antics in my life revealed himself to actually be Fae, Some people say they have Guardian Angels…I have a Guardian Fae whose voice I’ve known since infancy, whose voice I’ve argued with or ignored as I tread where angels feared to go, whose sarcasm I’ve growled about, but whose presence is as familiar to me as my own face, and now I know who and what he is, how he’s appeared to me in the past is nothing to how I saw him on that hillside in that circle.

There is a truth to the Fae being called the Shining Ones, and in their true form they are truly Fearfully Glorious.